I took some time away from activism.  In August my family and I set off on an extended road trip across the United States and for four months I didn’t read or write about circumcision.  Every day was an unpredictable adventure and we often camped in places that had no electricity much less a wireless signal.  When I did have time to write and a signal to upload it I was focused on keeping our travel blog take5foradventure (see link at right) up to date.

Now that we’ve arrived in Arizona our travels are on pause and one morning when I wasn’t busy job searching in our new town it occurred to me how long it had been since I had posted anything related to circumcision.  I took a moment for personal inventory and paused to reflect on the insights I had gained in our four months of travel.  Was doing my personal part to end circumcision still important to me?  Had I lost my fire on that front after taking a proverbial vacation from it for a while?

A wry smile crossed my face as I shook my head to myself.  I still feel as passionate as ever about protecting the right to intact genitalia for all human children.  How could I lose that fire when every day about 3-5 times a day I hold my circumcised penis in my right hand and aim it at the toilet?  Every time I change my clothes I look down at the ring-shaped scar on my shaft that despite several years of restorative efforts is still there and always will be even once it is covered up by extra skin I’ve forcibly trained my body to regrow.  The idea that I would ever lose sight of the importance of this cause no matter how long I took away from it was a laughable one.  Even if I wanted to try to forget my role in putting an end to circumcision I would still have to wake up every morning to someone else’s idea of how my body should look just like millions of other boys and men do every day in the United States.

It sounds harsh but yes I’ve been altered to fit someone else’s conception of how the male member of our species should look.  Open up most medical textbooks and you’ll see that the illustration of the penis with labeled anatomical parts is already circumcised.  It’s like the foreskin was never there, a mistake, a mutation that evolution somehow neglected to eliminate via natural selection.  So the US medical establishment definitely had some say in how I ought to look.  I’m sure every doctor and nurse involved with the procedure at the time felt it was very important that this be done so that weird piece of skin that there was absolutely nothing written about could be wiped off the face of the Earth, freeing them from disturbing wonderings about what it was for, or, if they were male, exactly what happened to theirs.

(On a side note back in September 2012 while I was manning a booth at the Mother Earth fair with the head of the NOCIRC PA chapter, Greg Hartley, I had an interesting conversation with a guy who was a nurse.  The guy had this big grin on his face while we were talking and I could tell he thought I was pretty ridiculous.  He had a lot of reasons why he thought circumcision was a good thing, many of them related to perceived public health benefit.  Rather than exchange volleys of medical journal citations with him I thought I would explore the ethical problems of removing part of a child’s genitalia without their consent.  He remained pretty confident until I finally said, “But don’t you think it’s kind of weird that someone cut off part of your dick and now you don’t know where it is.  I mean, seriously, what did they do with it do you think?  Did they just throw it away?”  The color sort of drained out of his face.  He assured me the conversation had been “interesting” and then left at what most would have considered a fast walk, if not a run.  So often I think the worst things we do to children are done because we’ve never healed from the things that were done to the children we used to be.)

Who else had a say in how I ought to look?  Well Mom and Dad did.  They had to sign off on the whole thing.  I’ve never really known how much of that decision was culled from medical coercion and how much was their idea because my parents’ memories have fallen prey to a mixture of forgetfulness and wishful thinking.  I worked in social services long enough to recognize the hollow perfection of a lie practiced on oneself.  If you tell yourself something happened that way enough times then eventually it really did happen that way.  Regardless of the details at the very least they signed on the dotted line to affirm that they agreed with the way the doctors thought I ought to look.

And in the end that’s what circumcision is about, the question of whether parents should have the right to decide which parts of the child’s anatomy are worth keeping and which should be cut off in the name of religion, supposed health benefits, or just protecting dear old dad’s ego.  We’re not talking about a haircut or removing an appendix that is about to burst and flood the abdominal cavity with toxins.  We’re talking about removing a large section of very sensitive and useful tissue that has absolutely nothing wrong with it.  On the contrary it’s essential equipment for the man to experience his full range of sexual functioning and pleasure.

The bottom line is I don’t think other people should have the right to decide the appearance or future function of a child’s sexual anatomy.  Every sane person on the face of the Earth agrees that the idea of an adult fondling a child’s genitalia is inexcusable and wrong.  How is cutting part of that genitalia off acceptable?  Because the medical textbook says so?  Because the rabbi says so?  Because dad and everyone else in the family had it done to them so it must be ok?   If you respect the sanctity of a child’s body and right to self-determination then you see how perverse and self-serving such ideas are.

So yes as someone who carries the scar born from other’s ideas of how I should look I will always be an Intactivist.  Once I truly admitted to myself what had been done to me my membership in the movement to end circumcision became inescapable.  While I can’t ever regain the original appearance of my body I can partner with others to someday create a world in which no child will have to wonder what happened to part of their sexual genitalia or why. 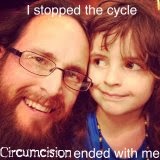 My son was born perfect.  He should be the one to decide if he ever wants to alter how his sexual anatomy looks and functions, not me.
Posted by Jeff in AZ at 12:49 PM

If you like my blog please check out my recently published book.